Construction of Keystone XL Begins, Met by Day of Action Across Texas and Oklahoma

**Update: 10:00AM 8/17/2012 – Thanks to everyone who made yesterday’s day of action to expose TransCanada’s quiet start to Keystone XL construction. Here is a compilation of just some of the action photos that poured in from across the region. 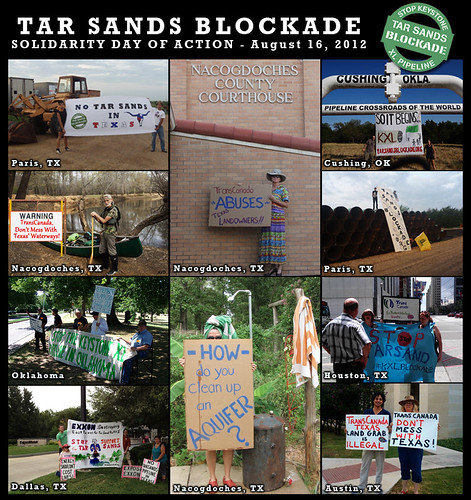 **Update: 8:40PM – Did you see the news? Tar Sands Blockade is featured in the LATimes!

Through nonviolent protest and the power of social media all of us exposed TransCanada’s quiet start to Keystone XL construction and made the story all about how people power is confronting this dangerous pipeline.

“Every day we can meet construction with direct action is a small victory for us,” he said. “It gives us a chance to describe the harms and abuses and the dangers of this pipeline going forward.” – Ron Siefert, spokesperson for Tar Sands Blockade. Read more at LATimes.com

**Update: 7:45PM -Tar Sands Blockade supporters gather outside of Exxon offices in Dallas today as part of actions across the region that erupted at the breaking news of Keystone XL construction. Exxon is one of the major profiteers from refining toxic tar sands. Keystone XL is an export pipeline that would send oil overseas while raising gas prices here in the Midwest. Big Oil rakes in more cash, leaving the rest of us to foot the bill. **Update: 6:50PM – Photos are still coming in from East Texas landowners who oppose the start of Keystone XL construction. There has never been a pipeline free of spills. Ever. Tar sands pipeline transportation threatens community drinking water and the livelihoods of thousands of farmers and ranchers. Not to mention the simple joys of folks who enjoy outdoor sports and wildlife. “All along, the pipeline has drawn many different kinds of foes. In this case, environmentalists worried about oil spills and global warming are joined by Tea Party conservatives outraged that a private company is allowed to grab land from people who don’t want to sell it.”

“If there were ever a moment to take a stand, this is it. Everyone who cares about the future owes these Texans a debt.” Read more on Grist.org.

**UPDATE: 3:40PM -We just got this great photo from an East Texas landowner who opposes the recent start of Keystone XL construction. Rural hunters and anglers know that Keystone XL not only threatens wildlife  but also their communities’ fresh drinking water. **UPDATE 2:10PM -Tar Sands Blockade organizers rally outside TransCanada Headquarters in Houston to protest the start of construction on Keystone XL. “TransCanada: In Business to Deliver…Disaster” “My fight is not about oil, not about another pipeline. My fight is on behalf of the First Nations in Alberta, Canada who have died and are now suffering from cancer at a rate much larger than the regular population; and, some with rare cancers never seen before in central or western Canada.”
– Earl Hatley from the Cherokee Nation, Delaware Tribe **UPDATE 12:40PM – Our first action in Oklahoma! TransCanada is starting construction at the beginning of the  Keystone XL route in Cushing, Oklahoma. Tar Sands Blockade organizers are there with a clear message, that while this project has started, we will not allow it to be finished. **UPDATE 11:30AM – As TransCanada quietly breaks ground on the Keystone XL tar sands pipeline landowner advocates climb atop stacks of pipes in an East Texas construction yard. Organizers unfurled a banner and flew a “Don’t Tread On Me” Gadsden Flag to demonstrate the diverse and unlikely alliance of environmentalists and Tea Partiers who all oppose Keystone XL. **9:00AM – Organizers drop banner in front of TransCanada’s bulldozers

Tar sands giant TransCanada has quietly begun construction on the southern leg of the Keystone XL— and right now organizers across Texas and Oklahoma are mobilizing a regional Day of Action in response to the industry’s toxic land grab.

Early this morning in East Texas, organizers braved bulldozers to unravel a banner reading: “No Tar Sands In Texas.” “TransCanada is putting families that wanted nothing to do with this pipeline in harm’s way,” Tar Sands Blockade Spokesperson Ron Seifert said. “Since our leaders and representatives will do nothing to protect our friends and neighbors, the Tar Sands Blockade is calling for people everywhere to join us and defend our local communities from a multinational bully.”

The message remains clear, people across the political spectrum, from Tea Partiers to environmentalists are uniting to TransCanada that while this project has started, we will not allow it to be finished.

“In the midst of record heat and drought, this just adds insult to injury,” says 350.org Founder Bill McKibben.. “More risk, more carbon, more heat–all the things farmers and ranchers don’t need.” This is a risk we can’t afford to take.

Planned events today include actions in Dallas, Houston, and Cushing in solidarity with landowners who say TransCanada has bullied and manipulated them through the use of eminent domain for private gain. Stay tuned for more breaking updates as this story unfolds.

“TransCanada lied to me from day one,” says Susan Scott, a local landowner in East Texas whose land was expropriated. “I worked 37 years for my farm, and TransCanada believes it is entitled to a piece of my home.”

Organizers with the Tar Sands Blockade are taking a stand, demonstrating their commitment to protect the public’s health, safety, and constitutional rights, and to preserve the integrity of the environment that supports local communities across the region.

Plans to integrate the proposed southern segment the existing Keystone system would allow extractors in Canada to transfer a toxic tar sands slurry directly to the export market in the Gulf Coast. This expansion of the petrochemical industry will pad the pockets of Gulf Coast refineries–operating in a foreign trade zone to escape state and federal taxes–while endangering hundreds of communities between Cushing, OK and Port Arthur, TX.

The Blockade is proud to be a part of the burgeoning Summer of Solidarity direct actions against fossil fuel extraction across the nation. Residents defending against mountaintop removal coal strip-mining in West Virginia, hydraulic fracturing (fracking) in Ohio, Pennsylvania, and New York, as well as coal exportation from Montana are confronting abuse and contamination on the part of dirty energy industries operating in their communities.

Permanent link to this article: https://tarsandsblockade.org/breaking-construction-of-keystone-xl-begins-met-by-day-of-action-across-texas-and-oklahoma/