Climate storms are raging and the dirty energy industry wants your silence.

Help Put Moccasins on the Ground to Stop Tar Sands

Tar Sands Blockade and Peaceful Uprising are teaming up to raise money for participants to travel to Moccasins on the Ground training camp in Eagle Butte, South Dakota. 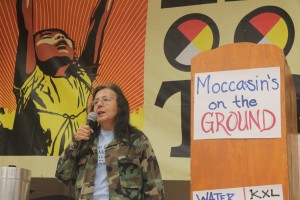 [The Keystone XL tar sands pipeline] is one of the biggest human rights violations in this country. They’re cutting through thousands and thousands of our cultural sites. They’re violating our nation-to-nation agreements. They’re disregarding our children and families who said no, stop. And above all, they’re violating the generosity that we made to the US government by making these treaties. Because essentially these people were homeless and jobless, and they had no where to go. So we opened up our lands to them, and this is what we get.

February 2013 statistics point out that the most poverty stricken populations in the Nation are on South Dakota reservations. TransCanada has capitalized on that by traveling and sending letters to each tribal office on the corridor offering funds to a population in need, provided they accept the [Keystone XL tar sands] pipeline. They are now even offering funds to host giant powwows–new forms of colonization. Our friend and ally Winona LaDuke calls it “predator economics.”

We’re all defending ourselves against the same giant economic predators that poison our bodies, pollute our traditions and try to control our communities. The predators’ tools take different forms: mining companies, media empires, Immigration and Customs Enforcement, local law enforcement, state governments and sometimes even tribal governments. Though we all share those struggles against capitalism and its tentacles, some of us—entire communities—are forced to resist especially powerful predation, surviving genocide, relocations, deportations and incarcerations on top of the brutal economies and shattered ecologies in which most of us live.

We have a plan to both heal past wounds and make the movement stronger than ever before.

Utah indigenous people and allies need funds to travel to the Moccasins on the Ground action camp in Eagle Butte, South Dakota. The Lakota are amidst a battle with TransCanada against the Keystone XL tar sands pipeline that would cross and threaten their sacred, life-sustaining lands—and they’re calling for our help. Likewise, we are asking for their help in return in the Colorado River Basin in our battle against Canadian corporations that want to mine tar sands and tar shale starting in the Book Cliffs of Utah.

Additionally, a group of Lakota people from the Great Plains also need funds to travel to the same Moccasins on the Ground camp and we want to raise funds to bring some of them back here for our Utah Tar Sands Action Camp July 21-28 (more info).

In many cases—including this one—receiving funding from generous donors is the only way that our people can participate and organize; we don’t all have resources of our own.

Do not confuse this with a plea for charity. Landless peasants from all over the world benefitted from the genocide of indigenous people across these occupied territories called the United States and Canada. When Indian tribes sometimes signed treaties with the US government which sometimes allowed new white settlers to stay on tribal lands–that was charitable. So working today to mend damage and stop the genocide of indigenous people is not charity; it’s justice and solidarity.

More than justice, it’s also smart. Donating to climate justice projects that link people of different classes, races and bioregions in a united struggle to stop massive destruction of the earth and its inhabitants is a exceedingly strategic donation.

Because the movement’s power comes from our unity, our movement is only as resilient as our hungriest neighbor, only as strong as our most hurt friend. The climate justice movement agrees with the old IWW adage: An injury to one is an injury to all.

The union of communities of resilient resistance is growing and the bonds between us are increasingly strengthened at action camps by braids of respect, love and trust. (for tools and tips on how to build resilience and resistance in your community, click here)

Together we’re conjuring a cultural spirit of resistance spreading across the land like an ancient aspen grove. Like an aspen grove, we are individuals connected by one root—all lives autonomous and yet united, prospering as separate communities across the land, but connected as one powerful movement emerging from the soil, related to each other and to all our ancestors.

Like Pando, the oldest living organism on the planet, a 10,000-year old aspen grove in Utah, we are exuberant and stunning forces of nature even stronger than our appearance suggests.

We are the land.

A caution: we must not mistake our lofty aspirations for our actual progress, and in this area, some people are especially prone to doing that. Tremendous work needs to be done to grow our movement so strong that the likes of TransCanada, Chevron and even the federal government can’t pierce it. Right now, we are small groves of quaking aspens reaching out to create something larger than ourselves.

To do that, years of broken treaties, environmental racism, and even racism within environmentalist movements will have to be sutured so that newfound solidarity can rise.

This climate justice work also needs to be dual pronged: while we join with indigenous people and other especially oppressed people in resisting annihilation, we also need to work with them to build stronger communities that make all of us more formidable in the next fight.

In that regard, for those of you in the Wasatch Front, please visit the Native American Trading Post Sunday June 9 between 10 am and 5 pm and make a donation for navajo tacos and fry bread being made there—3971 S. Redwood Road—vegan options are available.

Today, we also need your money.

This cultural and spiritual cohesiveness across borders is the only thing capable of successfully combatting multi-state and multi-national projects like the Keystone XL tar sands pipeline and the first tar sands and tar shale developments in the upper Colorado River Basin. When separated communities are left to to be poisoned and killed, our entire grove is vulnerable to the poison and our ability to fight depleted by fear and despair.

So, let’s be like the aspen grove that survives all the fires because our root is just too strong, our spirit too resilient—we can not be crushed, we just send up all new shoots of growth and survive those who threaten us. Let’s conjure a spirit so bold these monsters finally fear what they’re up against and recognize a new era is emerging.

We have so long to go, but the struggle is righteous.

Join us down this path. Click here now to make a donation today.

Permanent link to this article: https://tarsandsblockade.org/help-put-moccasins-on-the-ground-to-stop-tar-sands/