The fifth day of Stop Tar Sands Profiteers Week of Action took on the banks that finance the tar sands and the corporate offices of TransCanada. These key players in the battle to stop the KXL are experiencing an escalation in public outcry against their financing of TransCanada’s deadly project. People are taking the action the the banks doorsteps with letters and even costumers dropping business.

It happened at 137th St. Over 30 people including children and elderly rallied outside the TransCanada’s office, singing and chanting and bearing messages about the toxic tar sands. Due to this action, TransCanada instructed its employees not to come to work that day. See more photos here.

Even the Monopoly Man showed up to protest

Hudson Valley Earth First! had business with TD Bank today. But not the kind of business this toxic tar sands investor was expecting. In solidarity with Tar Sands Blockade, Hudson Valley activists held a protest outside TD Bank that eventually convinced some TD customers to pull their money out of the bank. 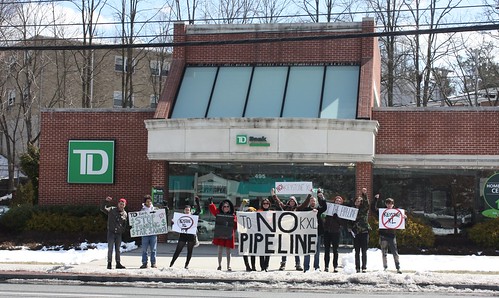 First, a delegation from RAN’s Boston community delivered a letter directly to a notable representative with distinct influence on the bank’s leadership team. The letter is signed by 50 people, from local environmental and academic leaders to socially responsible investment executives and clergy, expressing shared concern for the impacts coal has on our communities, our health and our economy. Immediately afterward, about 30 community allies gathered outside to call the bank out as the #1 Financier of US Coal and Climate Change. Security did not like any of it one bit, nor are they looking forward to when we’ll be back.

For more information about Rainforest Action Network’s campaign against Bank of America’s funding of dirty coal energy, visit their website.

Permanent link to this article: https://tarsandsblockade.org/weekofaction-day5/