VIDEO: Speaking Truth to Power From the Trees (Day 34)

Why Oppose the Keystone XL?

From The Trees: A Diary Excerpt From Cat Ripley (Day 35) 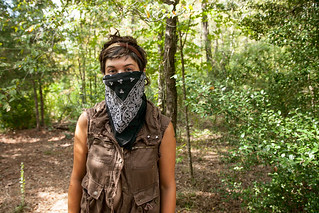 Below is a diary excerpt from Cat Ripley, who joined the tree blockade several days ago. Here is their story from the trees:

Sitting in a tree all day brings on tides of poignant thought; memory thickly-laden with emotion, siphoned from the weightiest of dream states and experiences.

Let me tell you how I got here…

After leaving Cascadia [Pacific Northwest], my original plan was to head far south, to the desert outside Taos, to seek solitude on the land of my kin, to hole up for a while. To paint, to write, to muse. I quickly solidified a once wavering notion – that to plan is a fools work, and we shouldn’t waste precious time with such things. The road will provide the way.

I followed friends I met in early September, and started making my way south, slowly. We slept on beaches, in groves of prickle bushes higher than our heads, in the bodies of redwood trees – so grand, we could fit three comfortably.

I found myself traveling alone, funneled without mercy back to San Francisco, the metropolis of my dreams, but still, ever-reeling back towards the woods where I truly belong. I participated in the 20th Anniversary of Critical Mass, hitching rides on cargo bikes, a pedicab (paid for by some kind “suits” in the plaza), but mostly running alongside the mass of peaceful protesters. That night, after joining up with a girl I met further north, we went down to the Mission to see a screening at the ATA (Artists’ Television Access, a collective space that has been around since 1984). There I caught my first view of Petropolis, a documentary about the Alberta Tar Sands, characteristically distinct by it’s simple audio and epic aerial shots. I was stunned, I was unmoved, I wanted to vomit and run and spin and shake all at the same time. I wept relentlessly.

It was then I decided I would do all that I could to stop this massacre. A few days later, I left for Texas.

Now here I am 80 feet off the ground. They’ve started bending the pipes to go around us. We haven’t formed an accurate count of how many days it’s taken/going to continue, but whatever the count it’s all thanks to the tree blockade and all of the humans who spent time building, supplying, and living up in these trees.

It’s been quiet today, which was much appreciated. Last night was so cold, I don’t think any of us left our sleeping bags before 10am. Finally we have ample unobstructed sunlight to warm our bones and charge our techs. This solar pad is mighty.

These passing hours have been rough. The weather has grown colder. I mostly sleep or read fiction, only leaving the warmth of my cocoon when I have been thoroughly convinced that the sun is high enough in the sky to warm my bones. Jerry and B are traversing on ropes back here [to my tree] from the timber scaffolding wall, bringing extra warmth for the night. Maybe we’ll play cards – anything to get us out of our own headspaces for a moment. We do what we can, these times are dark.

Fear aside, I still harbor much hope. So much.

Permanent link to this article: https://tarsandsblockade.org/day35/