DC Tells Obama to Do the Math and say #NoKXL

UPDATE: Cherri Foytlin was arrested with the Tar Sands Blockade a few weeks ago. Today she was in DC speaking to thousands of people who surrounded the White House to tell Barack Obama to stop the Keystone XL. Watch this great video of her speech:

Bill McKibben and 350.org are going on tour across America to build the movement we need to face the crisis of climate change.

Thousands of people will be in Washington DC to present the terrifying new math of climate change and unveil a plan for how we can rise to this planetary challenge.

Bill is joined by friends from across the climate movement and beyond to explain how together we can confront the fossil fuel industry, using lessons from the most successful movements of the past century and the past year of dramatic new actions against the industry across the country.

There’s a new sense of momentum in the campaign against Keystone XL. We pressed the button on an email announcing today’s protest a few minutes after the networks called the election for President Obama. In just 10 days, thousands of people have signed up to come to the capitol. Volunteers have helped organize buses from New York City, Philadelphia, Michigan, and Ohio.

What accounts for the new sense of energy? Large amounts of credit are due to the brave and ongoing actions of the Tar Sands Blockade in Texas, where landowners and activists have come together to block the southern leg of the Keystone XL tar sands pipeline. Their ongoing direct action has made the front page of the New York Times, emboldened farmers and ranchers up and down the pipeline route, and inspired people across the entire nation.

Check out the livestream here for the Do the Math event and rally directly after:

From Jamie Henn with 350.org on It’s Getting Hot in Here:

Thousands of people are descending on Washington, DC this morning for a big demonstration against the Keystone XL tar sands pipeline. The protest, the first demonstration at the White House since Obama’s re-election, should send a clear message to the administration and Big Oil: opposition to Keystone XL isn’t going away, it’s only getting stronger. 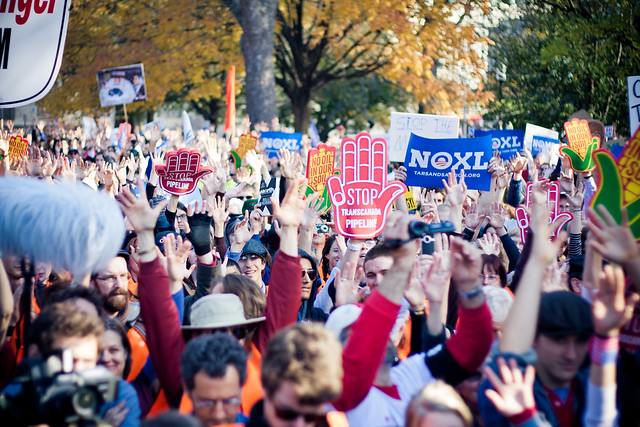 It’s been over a year since 15,000 people surrounded the White House to push President Obama to live up to his promises to “end the tyranny of oil” and help “heal the planet.” Three days after that demonstration, the administration announced that they would be delaying a permit for the northern leg of the pipeline due to environmental concerns. A few months later, under immense pressure from the fossil fuel industry, President Obama made a symbolic concession to Big Oil, ordering government agencies to expedite the southern leg of Keystone XL.

But now, the southern leg is encountering direct opposition from landowners and activists from around the country who have joined the Tar Sands Blockade, an ongoing encampment and series of actions in Texas. And opposition to the northern leg is as a firm as ever. They’re united by a common concern for their air, water, land, and the climate we all share. “All those concerns still exist,” BOLD Nebraska’s Jane Kleeb recently told the Associated Press. 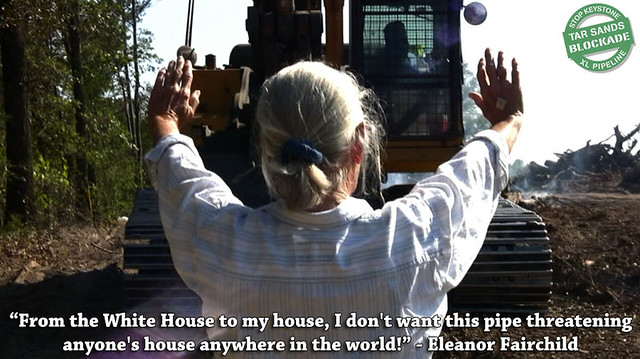 Before today’s demonstration at the White House, around 2,000 people will pack into the Warner Theater for a Do The Math tour event with Bill McKibben. The 21-city tour, which began on November 7 in Seattle, has sold out every venue it’s visited, rally thousands of people each night to join a new movement to take on the fossil fuel industry. Along with keeping up the fight against Keystone XL and other dirty energy projects, 350.org is using the tour to kick off a new fossil fuel divestment movement modeled on the anti-apartheid movement of the 1980s. Over 50 campuses have already joined the effort, with dozens more expected to sign up before the end of the fall semester. The campaign scored an early victory two weeks ago when Unity College in Maine announced that it would be divesting its endowment from fossil fuels. Days later, the Mayor of Seattle committed to investigating how his city could also divest.

For those of us who have been on the tour, and are coming into DC today to protest at the White House, it feels like there is a new surge of momentum lifting up all of these fights. In 2008, many progressives went to sleep after the election. Not this time. Our eyes are open. And while the odds are still long — the fossil fuel industry is spending millions of dollars to try and win approval for Keystone XL and block climate action — we’re keeping hope alive with every protest, every action, and every day we don’t back down. See you at the White House.

Permanent link to this article: https://tarsandsblockade.org/do-the-math-dc/