Seven brave blockaders were arrested for stopping a pipe truck and completely cutting off all transportation of pipes to the southern segment of Keystone XL for the entire day!

We're All In This Together!

Now that all of our sweet Jail Birds are free from their cages to sing about TransCanada’s plan to steal land and ruin futures, we wanted to take a minute to thank you all for participating in this action with us!

We know we have a huge fight ahead, but we organize forward with more steam and more support than ever for our landowner allies, downstream indigenous communities, and the struggle to prevent catastrophic climate change!

We’ve been blown away so far by the response on not only our Facebook and Twitter feeds but in the greater media world as well! Check out this great coverage of our work so far:

And it’s only day two! So as you can see, this manifestation of the compelling story of these landowners and their supporters, of the intersections of climate justice and property rights, of the Tar Sands Blockade IS ONLY THE BEGINNING!

We’re All In This Together! One Big Flock of Jail Birds!

Max, Chris, and Ray were just released from Polk Co. Jail and thanks to your support, they feel greeted as HEROES!!!

Thank you!! Please consider a donation so we can maintain our campaign! – http://bit.ly/TSBAid

We expect release within hours and can’t wait to see them again! Please keep them in your thoughts!

Please consider a donation to help cover their legal fees and to keep our rolling campaign of nonviolent civil disobedience alive!

**UPDATE: 12:45AM – #LoneStarTammie Released – Max, Chris and Ray are still being held!

We expect Max, Chris and Ray to be released sometime before dawn! Our supporters are rallied at the jail, and we’ll let you know!!

#LoneStarTammie Reunited with Her Daughter

In other news, the story of our blockaders and their stance in solidarity with rural landowners facing eminent domain seizure of their homes is being picked up in the greater blogosphere! EcoWatch.org has posted our story to their readers, and DirtyTarSands.org wrote a fantastic piece tying together what the Republican National Convention, the Obama Administration’s new fuel standards and our seven arrests in Texas have in common – you guess it, it’s Keystone XL!!

Stay tuned with us! There will be more news tomorrow and moving forward as always! We’re in this to win this! TransCanada’s will come to rue the day they decided to steal land in Texas!

Still Waiting for Our Heroes being held in Polk County Jail

Please consider making a donation in support of their courage to draw attention to the cause of stopping the Keystone XL pipeline!

Today has been huge, and we couldn’t have done it without Tammie, Max, Chris, and Ray!

Max, a climate organizer, and Ray, a small businessman from Houston, remain in jail! As do #LoneStarTammie, a proud Texas grandma, and Chris, a rural farmer from Fannin County. We expect them to be released from jail sometime after midnight. But please hold our brave friends in your thoughts.

Also! Thanks Treehugger.com for helping bring visibility to our buddies and their civil disobedience in solidarity with landowners being railroaded in Texas courts like Julia Trigg Crawford.

NO EMINENT DOMAIN for PRIVATE GAIN! NO COMPROMISE in preventing CLIMATE CHANGE!

#LoneStarTammie has been before the judge and bail has been set but the Sheriffs Dept. has refused to book her in a timely manner and now despite there being someone there to pay for her release, we are being told it may be hours before they will return her to us… FREE TAMMIE CARSON!! — at Polk County Jail.

Today we closed the tar sands pipe yard for 5 hours. And because the authorities were forced to dismantle the truck to make arrests, WE COMPLETELY CUT OFF ALL TRANSPORTATION OF PIPES TO THE SOUTHERN SEGMENT OF KEYSTONE XL CONSTRUCTION FOR THE WHOLE DAY!

We’re told that empty pipeline trucks were seen driving aimlessly around the region.

Again, we witness the power of bringing together those battling corporate eminent domain abuse and those fighting to defend our natural commons from the unconscionable harm of surface mining and catastrophic climate change. Both are struggles to defend HOMES, and together we can and WILL win the uphill battle to STOP KEYSTONE XL!

All 7 arrestees are now in police custody and are being processed!

Please support the movement that supports their courageous action! Generous donations may be given here:

**UPDATE: 4:10PM – Check out all the new photos from today’s Keystone XL shutdown

We just loaded a bunch of new uncut action photos on our flickr stream. 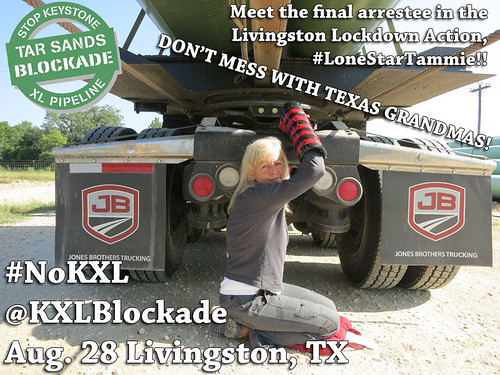 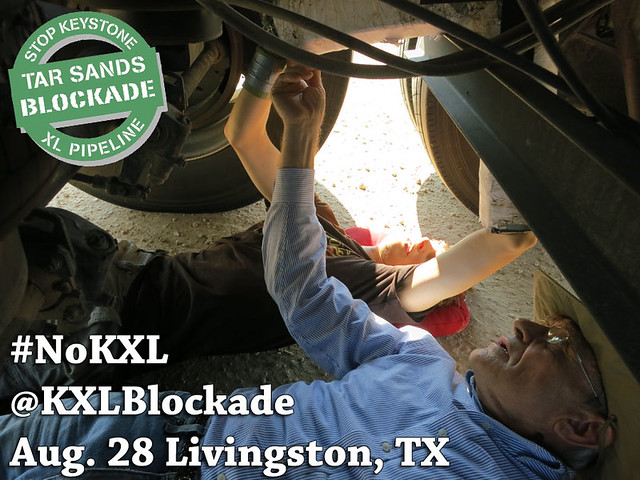 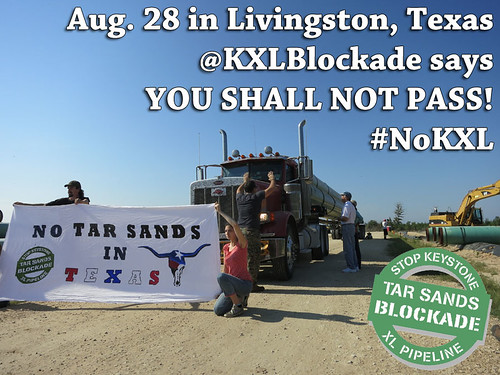 YOU SHALL NOT PASS!

All of our blockaders are safely in jail, and the entrance to the yard remains blocked! The police dismantled the truck to extract them so the pipe yard remains effectively shut down for the day.

Every day of delay is a victory. Allowing us to shed light on the dangers of toxic tar sands pipeline.

The final blockader, #LoneStarTammie, has been arrested and put in police car.

One blockader is holding tight! The 3 others have been arrested. 1 of 6 arrested so far is a journalist.

Chris Voss, another participant in today’s action, is concerned for the health and safety of not only his own family, but his entire rural Fannin County, TX community. “Tar sands pipelines have a terrifying history of leaks,” Chris laments. “Keystone XL threatens our water, which is part of the commons. I can’t just stand aside while our collective commons are being taken, controlled, and polluted.”

There are currently 7 law enforcement vehicles on site, and we’re not backing down!! This is just the beginning.

ALL YOUR PIPE ARE BELONG TO US

Careful with our friends who know that the cost of inaction is far riskier! Three support blockaders have been arrested. Four remain locked to undercarriage of pipeline truck. SHARE for their SAFETY and the safety of all who will come next!! This is only the beginning! – bit.ly/kxlfj2 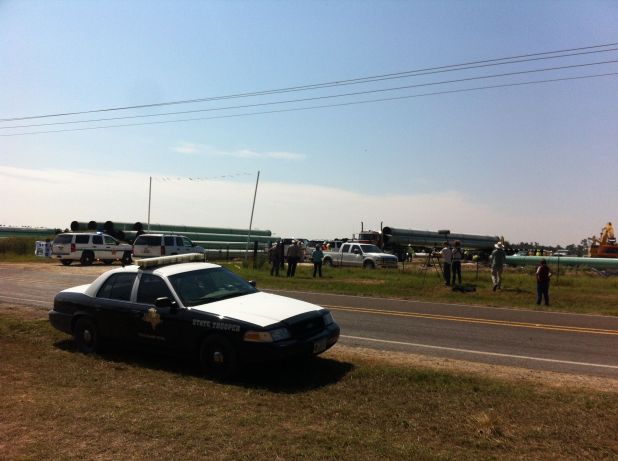 Police and Emergency Vehicles "Assisting" with our Blockade

**UPDATE: 11:12AM – The local Sheriff is doing us a solid and helping us blockade! 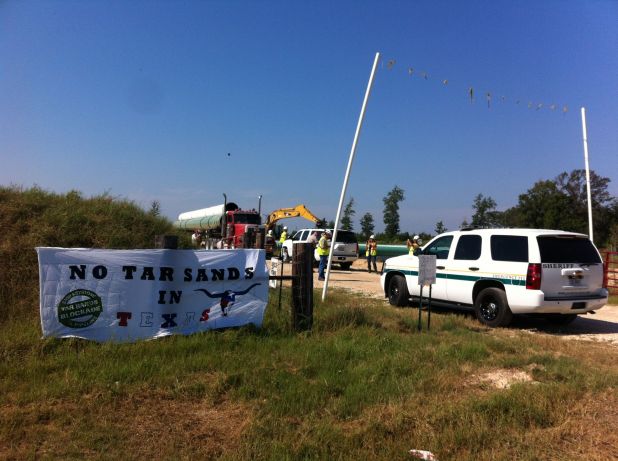 The local Sheriff giving us a helping hand!

**UPDATE: 11:00AM – Rural Sheriffs are on the scene, 3 Arrests Have Been Made So Far – Have You Shared Their Stories With Your Friends, Yet?

The rural sheriffs haven’t seen anything like this before! Three support blockaders have been arrested. Four remain locked to undercarriage of pipeline truck.

**10:00AM – 4 Blockaders Have Locked Themselves to a Pipe-carrying Truck In Livingston, TX, bringing construction on the Keystone XL pipeline to a stop!!

Just minutes ago four landowner advocates and climate justice organizers have locked themselves to the underside of a massive truck carrying 36″ pipe intended for Keystone XL construction. The truck is parked, idled at the entrance of the pipeyard, rendering construction activity impossible. Seven blockaders total are onsite risking arrest. We will be getting photos and video throughout the day, but check out our testimonial video below (click the picture) of some of today’s blockade participants.

Blockaders from the Red River valley to the Gulf Coast are uniting to realize their collective vision of a world without toxic tar sands pipelines being forced through the homes of families who don’t want them. Today’s message is clear: the people are rising up to defend their homes.

This act of peaceful civil disobedience comes in the wake of a recent court decision condoning TransCanada’s use of eminent domain for private gain. Last week Lamar County Judge Bill Harris ruled in a shockingly abbreviated fifteen-word summary judgment that Texas farmer Julia Trigg Crawford cannot challenge TransCanada’s claim that it is entitled to a piece of her home. The underwhelming ruling was emailed to Ms. Crawford’s attorney late in the evening of August 15 from the Judge’s iPhone.

The arrogant disregard levied at landowners like Julia Trigg Crawford for simply not consenting to have a tar sands pipeline permanently bisect their homes is what motivated Houston businessman Ray Torgerson to take action with the Blockade. “The fact that this corporation can check a box on a form and steal someone’s land is insulting,” Ray says. “We are here to defend our homes and stand with landowners like Julia.”

Further emblematic of the disrespect small town families like the Crawfords have faced throughout Keystone XL legal proceedings, Ms. Crawford received first notice of the ruling from a reporter seeking comment who had been blind carbon copied on the County Judge’s email ruling.

“It was heartbreaking to hear a generational family farm like the Crawford’s can be taken away by a multinational corporation,” exclaims blockader Audrey Steiner, a linguistic anthropologist from Austin. “I’m here to change the direction our country is taking.”

As appeals wind through the legal system, pipeline construction continues.

**PHOTOS ARE ON THEIR WAY!

The concerns of the blockaders today go well beyond TransCanada’s appalling contempt for property rights. As Tammie Carson, a lifelong Texan living in Arlington explains, “I’m doing this for my grandchildren. I’m outraged that multinational corporations like TransCanada are wrecking our climate. The planet isn’t theirs to destroy, and I’m willing to take a risk to protect my grandchildren’s future.”

Denny Hook, a retired Methodist minister from Gainesville Texas, describes himself as “An environmentalist that happens to be a minister.” In taking action today, Hook hopes to inspire more people to join the movement. “Things are so dire that if all of us don’t rise up we won’t make it. This pipeline is the difference between Earth on the edge and Earth over the edge.”

In the face of this waking nightmare, blockaders have little choice but to act out of conscience. We simply have no time left to wait for the legislative to catch up with the judicial. We won’t allow our homes and our futures to slip through regulatory loopholes!

Tar Sands Blockade is a coalition of Texas and Oklahoma landowners and climate organizers using peaceful and sustained civil disobedience to stop the construction of Keystone XL.

“The blockade is an expression of people who have spent years using every available avenue afforded to them, and nothing has worked,” explains Tar Sands Blockade spokesperson Ron Seifert. “The urgency of this crisis is galvanizing supporters who understand that doing nothing involves a greater risk than taking action.”

Permanent link to this article: https://tarsandsblockade.org/2nd-action/