Why Riseup.Net is Awesome & You Should Support Them

Be sure to watch MI CATS on Twitter (@michigancats) and Facebook as well! Support their courageous campaign with a donation through WePay.

UPDATE 2:25pm: Here is an image from the woods of our sit looking out onto the stopped construction equipment. 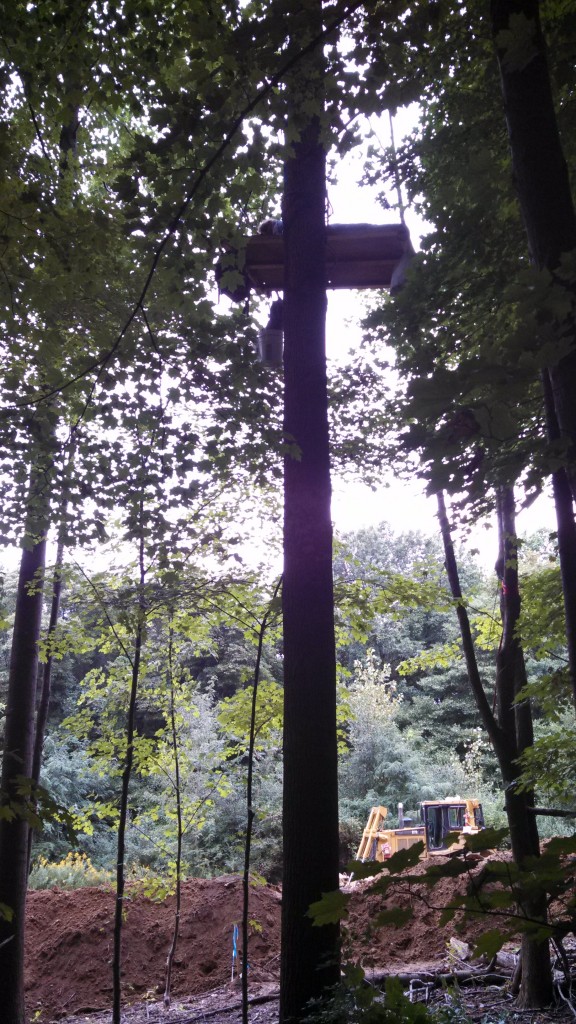 View of tree-sit from behind.

UPDATE 2:14pm: There is a cherry picker onsite with two law enforcement men looking like they are getting into it wearing masks and carrying bolt cutters. They have warned a sitter that they will be arrested if they do not come down.

UPDATE 1:41pm: Construction is stopped on the easement in the area of the tree sit. A few neighbors are enjoying the scene from across the road with binoculars at their own lawn chair observing spot! No arrests have been made at this time but our sitter is hanging tough on their own since the support team has been chased off by aggressive police interactions. Here is a scene of stopped work on the easement. 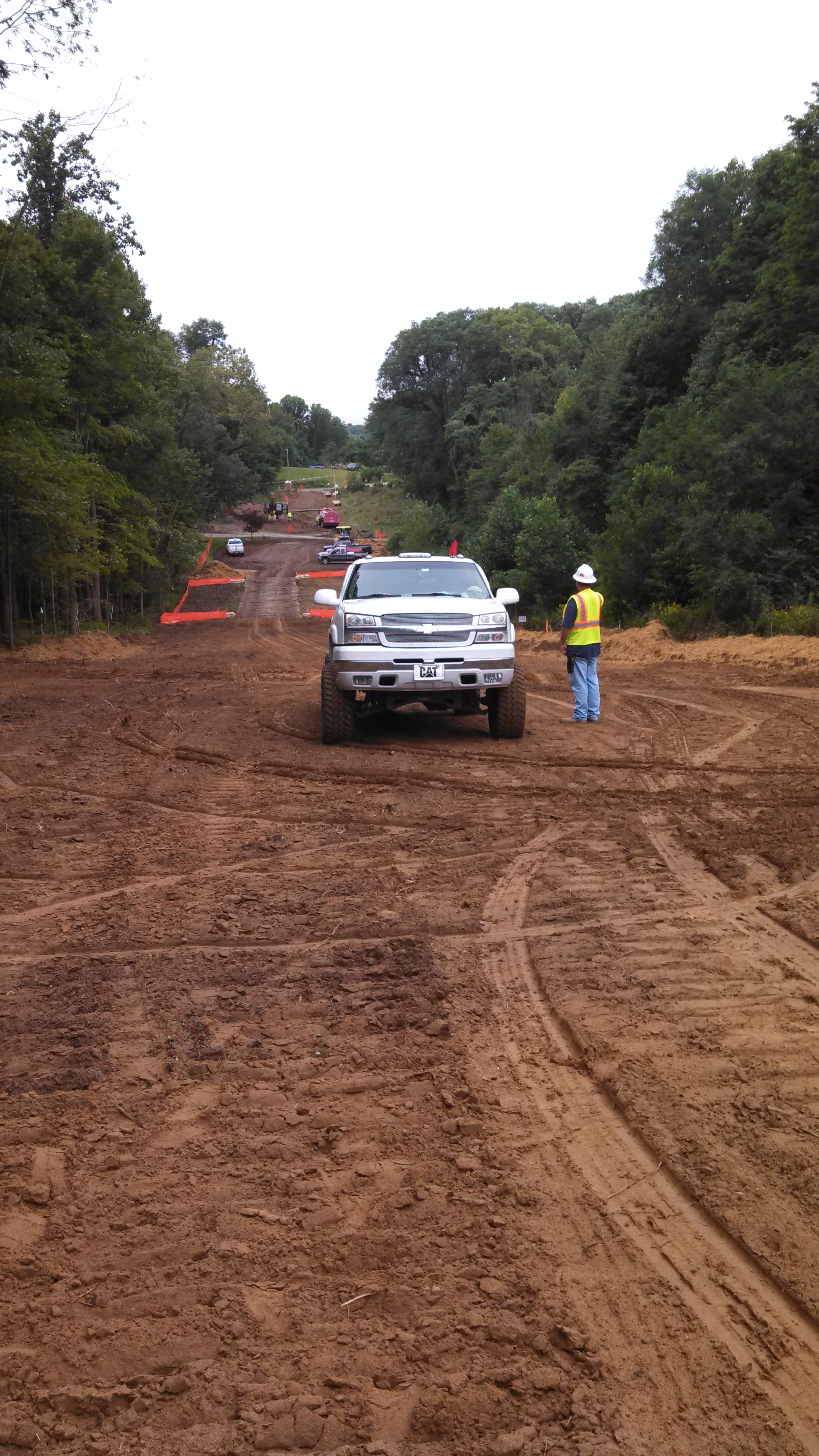 UPDATE 12:12pm: The police have been staying away from the sitters’ lifelines!! Thanks to those who called the sheriff department! 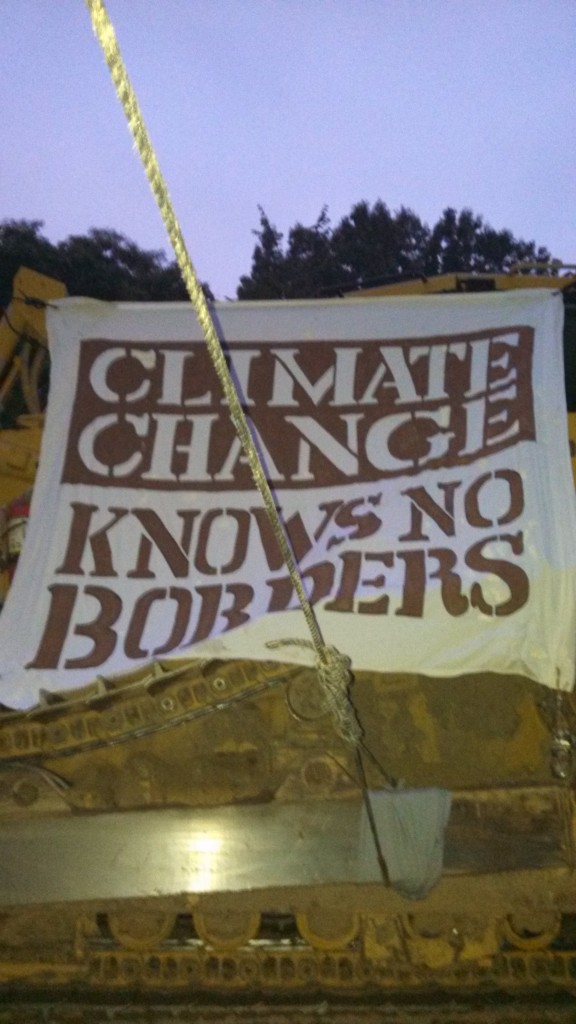 UPDATE 11:49am: The police brought out an air mattress and threaten to cut the sitters’ lifelines. As you can see in the foreground of this picture, this is one of the ropes anchoring the sitters platform fifty feet in the canopy. The other end of the line is anchored to a piece of pipeline equipment, immobilizing it. If this line in tampered with in any way the platform will tip, if it is cut the platform will drop out of the tree.

UPDATE 10:00am: The police are not being respectful of the sitters’ lifelines. Please call the LaPorte County Sheriffs Office and let them know we are watching! 219-979-3530 and press 0 for the operator.

UPDATE 9:20am: Workers have arrived on site. 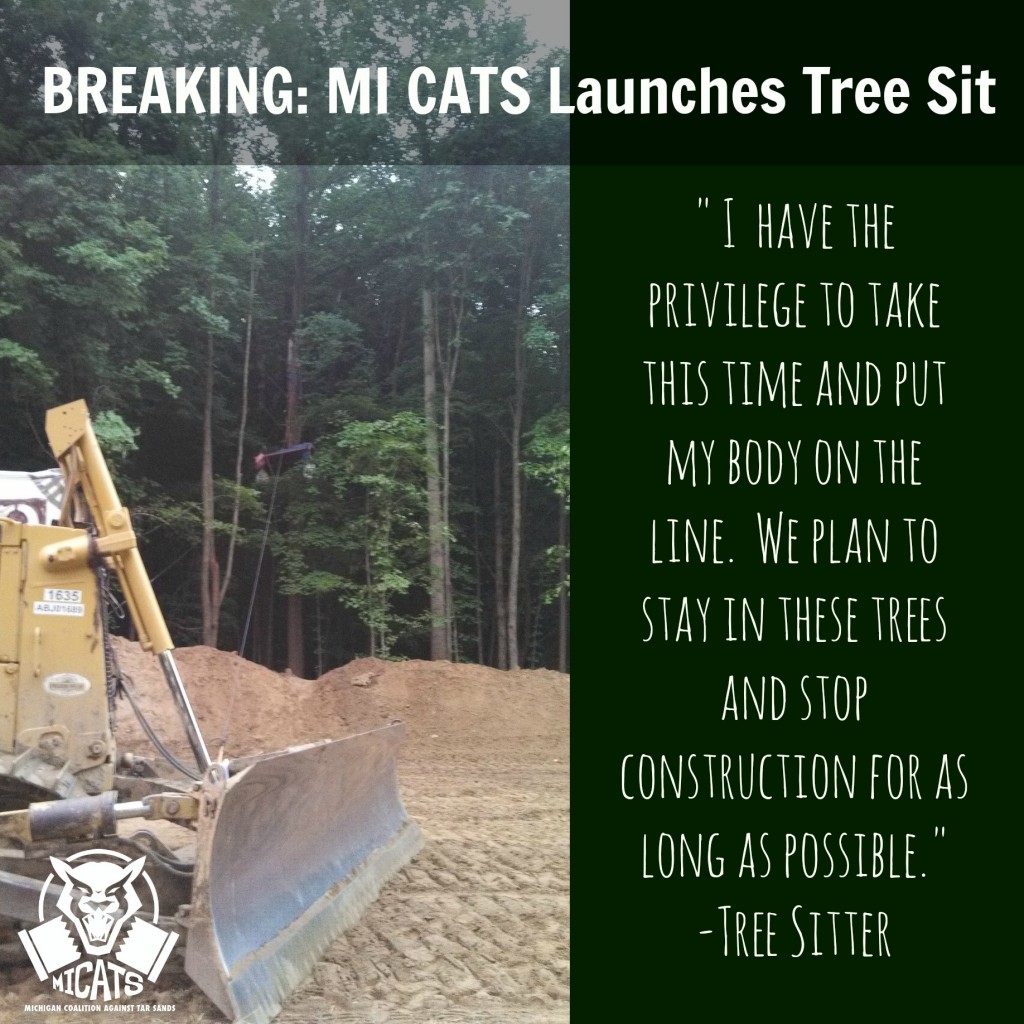 MI CATS has just launched yet another tree sit against Enbridge!

This morning the Michiana Coalition Against Tar Sands (MICATS) set up a blockade of Enbridge Inc.’s expansion of tar sands pipeline 6B. This pipe, the same that ruptured in 2010 causing the largest and costliest inland oil spill in history, is currently under construction to increase the flow of tar sands from 240,000 barrels per day to 500,000 barrels per day. 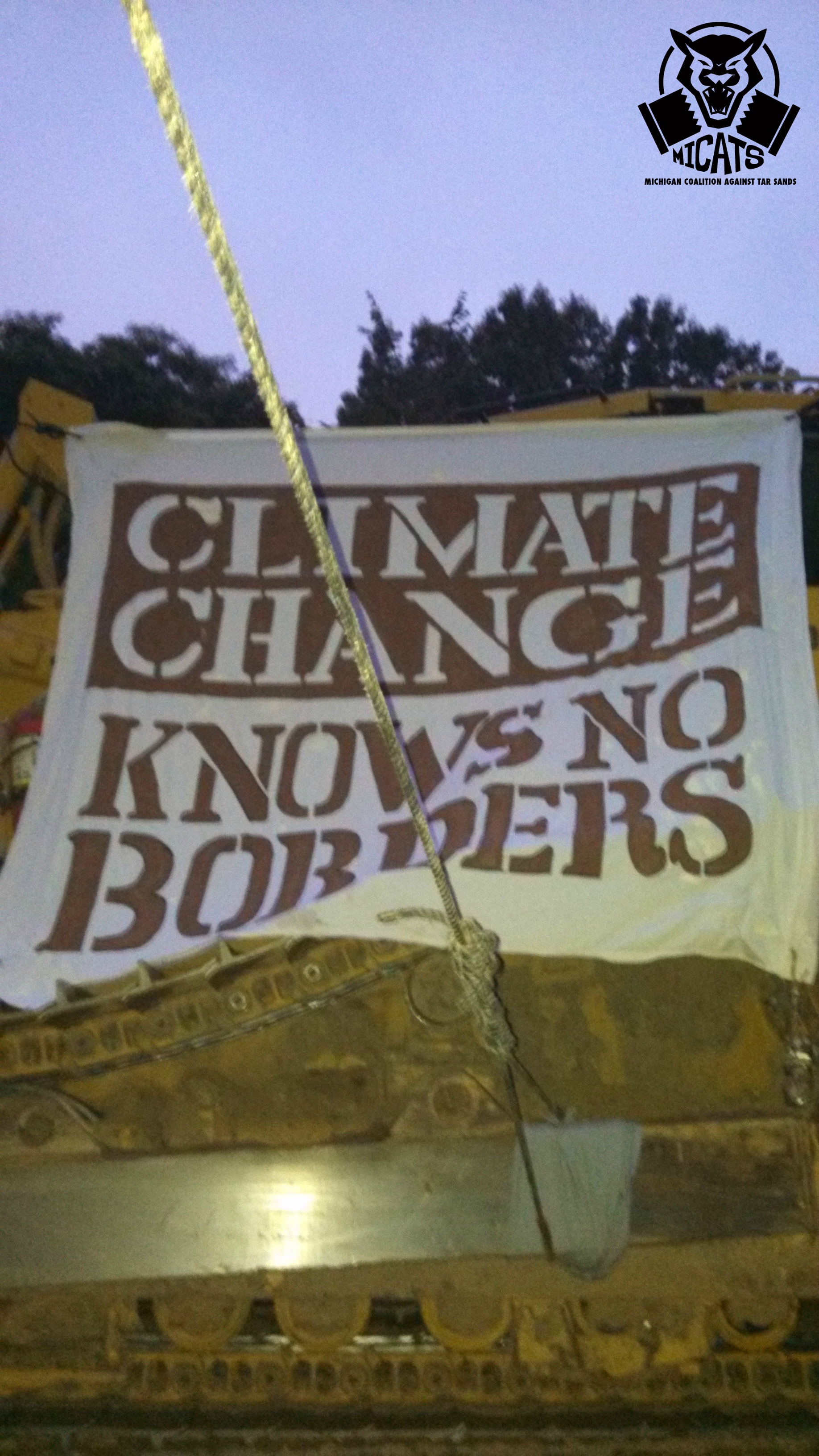 Throughout the night a team of MICATS members climbed trees surrounding the Enbridge construction site, and a platform was raised and anchored to several different pieces of construction equipment. Tampering with the ropes, or moving the equipment will cause the platform to tip, dropping the sitter 50 feet to the ground. According to the tree sitter, “I have the privilege to take this time and put my body on the line, I plan to stay in these trees and stop construction for as long as possible.”

Tar Sands – or “diluted bitumen”- is mined in Alberta Canada, infused with
barrels of water and a toxic chemical concoction to turn the substance into a peanut buttery texture; then forced into high pressure pipelines spanning the continent. Companies are scrambling to get as much of this highly corrosive and dirty oil to ports for exportation before the already popular resistance stops its consumption for good. People all along the tar sands path are being poisoned- from those living near toxic tailings ponds at the point of extraction, to anyone near one of Enbridge’s pipelines that spill an average of 80 times per year, to the communities near refineries dealing with air pollution and Petroleum Coke- a refining by product being improperly stored. “We are following in the footsteps of the First Nations people of Western Canada as we try to stop Enbridge from destroying communities and lands across North America, “ said Scooter. 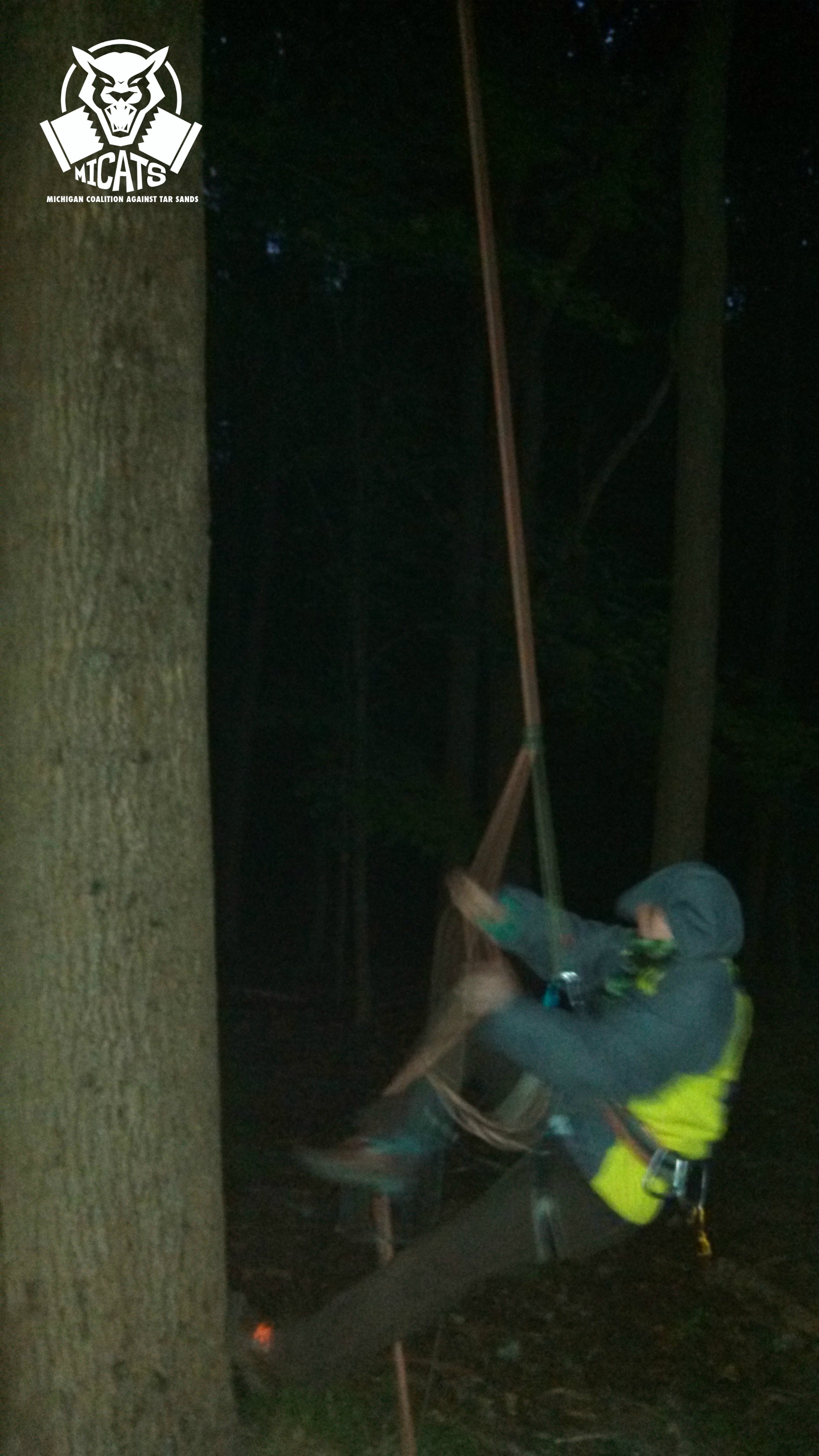 The EPA admits that Enbridge has not fully cleaned up the oil in the Kalamazoo River, but that the clean-up process is causing further pollution. “If Enbridge doesn’t even know how to fix their past mistakes, why would we allow them to build another pipeline that will pump double the amount of toxic tar sands? The expansion of line 6B has to stop now so that the land and people can heal,” said Scooter.

Permanent link to this article: https://tarsandsblockade.org/micats-scratch-back-at-enbridge/