Why Oppose the Keystone XL Pipeline?

The Time Has Come: A Call to Action 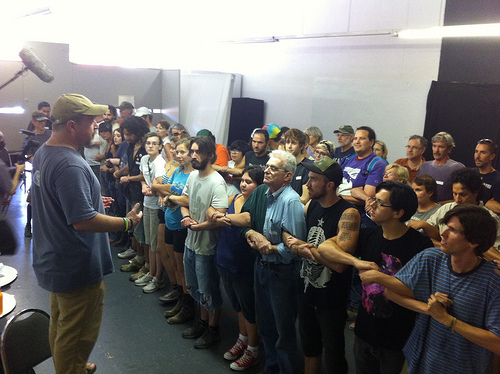 Join thousands of others in taking a courageous stand against the dark tide of fossil fuels that threatens our life on this planet, and sign up to take action at tarsandsblockade.org. All of us have different stories that lead us to this place, but we share in being inspired, hopeful, and determined to stop the Keystone XL pipeline.

Now, it is time for our stories to join together and bend the arc of history towards a future without tar sands.  We are issuing a call – starting this September, your company is needed in Texas.  The path ahead requires great courage. The odds are stacked against us; money is overwhelmingly tipped in TransCanada’s favor. But we can win – we plan to win.

As we recently announced, construction of the southern leg of the Keystone XL, running through Oklahoma and Texas, has begun. Our task is clear: through peaceful and sustained direct action, we are going to bring construction to a halt – permanently. Of some things we can be sure: It will be difficult. It will be hot. Many of us will be arrested. Our resolve will be tested and our commitment strained. The government and the corporations know this, and they will try to exploit it; they are determined to see us fail. What they aren’t equipped to deal with is our joy, our resolve and our passion. No force on Earth can make us forget what is at stake. No violence, no repression, no method at their disposal can extinguish our belief that the future of life on Earth depends on us uniting to put an end to the tyranny of oil.

Let’s be clear about what is at stake. The Alberta Tar Sands is a reservoir of extreme fossil fuels vast enough to single-handedly spell death for the climate, if we are foolish enough to extract and burn it. The nearly 2000-mile path of the Keystone XL pipeline, Big Oil’s tar sands-transporting monstrosity, will create a permanent environmental disaster zone, bringing ruin to countless communities and threatening the health and water supply of millions. The carbon contained in this filthy resource will rocket us past all meaningful tipping points, sending our atmosphere into a catastrophic spiral of warming. Ice caps will melt and our temperate plains will turn to deserts as our food supply cooks and half of the species on this Earth fade into the eternal sleep of extinction.

This simply will not stand. The situation is too dire to wait for political or economic solutions.  When you join the Tar Sands Blockade in Texas, be assured that you are joining a movement that intends to win. We believe the time for symbolic arrests to prove a point has passed, and our strategy reflects this belief. With wood and concrete, stone and water, steel and flesh, we will pit our bodies and our spirits against the engines of destruction. One day at a time, we will mire TransCanada in a struggle that will give new meaning to the term “sustained direct action”.  Nothing less can accomplish our goal.

Let’s face it, the environmental movement has been losing. We have been losing because we refuse to be honest with ourselves. Small campaigns, small goals, and small actions aren’t enough. Community organizing to resist fossil fuels will always serve as the foundation for our movement. But if we are to defeat the biggest and most destructive energy projects, we are going to have to find a way past the failing status quo. Tar Sands Action set a new precedent for civil disobedience actions in this movement. It had the right idea, the right vision, but a flawed political analysis. Now we know that the corporations won’t stop unless we make them stop.

In 2011, political prisoner Tim DeChristopher shared his vision of ending Mountaintop Removal with a massive, rolling wave of mine site occupations. It is clear that a similar effort will be required to bring down the KXL. We know that Texas is a long journey for some, and that the privilege of leaving work isn’t available to everyone. We want you to come because this is not just another action. If we succeed, we will redefine the fight for a livable future in this country.  Following in the footsteps of the largest climate civil disobedience actions in decades, there can be no doubt that it is time for the largest disruption of fossil fuel business as usual.

With your participation, Tar Sands Blockade will turn the tide against TransCanada, and make other fossil fuel giants think twice before trying to trample the dignity, health, and autonomy of our communities and ecosystems. We can’t do it without you.

This is a pivotal moment in history, and it is unlikely that there has ever been a more important fight in the history of our species. Our actions right now will determine whether our children, our grandchildren, our great-grandchildren and the countless generations to come, long after we have turned to dust, have a living and healthy planet to thrive on. We recognize the gravity of the situation. We understand the magnitude of the challenge we face. We embrace the courage we must summon. We acknowledge the sacrifices that must be made. We are ready. We ask only that you join us.

Permanent link to this article: https://tarsandsblockade.org/the-time-has-come-a-call-to-action/