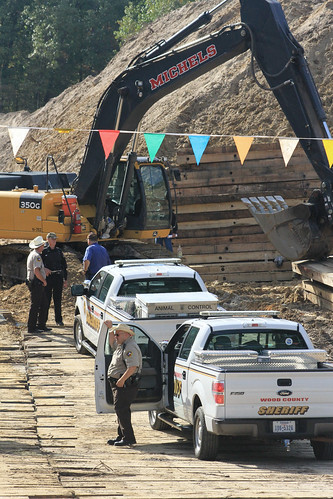 I awoke this morning with a bleary-eyed smirk to a text that two more of my friends had successfully made it up into the police state once known to some as the Texas Tree Village.  As exciting as this may be for those of us sitting comfortably behind our computer screens, it’s incredibly important to understand the immense risk undertaken by these folks. Because of the ongoing radio and phone silence from the village, I feel that it’s completely necessary to describe the atmosphere at the village as I left it just over a week ago in order to fully appreciate the situation they have volunteered to enter and be able to support them accordingly. It’s also safe to assume that the things I describe here will only be compounded and made worse in retaliation to these new sitters’ audacity and defiance of previous intimidation tactics. It is my hope you will draw new conclusions and open new channels of dialogue about what these new policing techniques mean for our movement and how we can learn to see beyond them to a future without oppression, ecocidal and otherwise.

Following the brilliant mass action on October 15th, the police presence at the tree village roughly doubled.  I feel that it’s incredibly important to again highlight that these police are not active on-duty officers that are acting on behalf of their city or county in order to “serve the greater good”.  Likewise, they are not acting as mere flashlight-wielding security guards either.  These are off-duty police officers that are being paid $30 an hour by TransCanada Corporation quite simply to be their police – privately, corporately-owned police paid to prevent food re-supply and enforce trespassing laws on a piece of land that TransCanada itself is arguably trespassing upon. If legitimate crimes were being committed by the tree-sitters that concerned the general public that they claim to “serve,” you may reasonably expect that the local police force would feel compelled to self-direct their own initiative to address the situation. But because this is clearly not the case, you should feel free to draw what conclusions you will about the legitimacy of these so-called “crimes.”

These private police are carrying guns and they are arresting and assaulting my friends but they are not allowing the press to document their police state and are handcuffing them immediately if they enter the site. Because they are no longer on taxpayer payroll, the actions of these officers are not accountable to the people of Texas. These privately-owned police are following a fat paycheck and are acting accordingly.

As a telling example, when I was immediately handcuffed after descending from my tree last week, the arresting officer was unable to tell me what I was being arrested for because apparently he had “not been told yet.” Why then, you may ask, was I arrested by default? If an actual crime had been committed perhaps it would not be necessary to wait for an order to manufacture one.  I spent the next 20 minutes listening to armed, camo-clad officers attempting to contact TC higher-ups and ask for further orders. At first my handcuffs were removed and I was told by the county sheriff that I would be able to leave the site without arrest if I promised not to return, but this changed quickly after phone contact with TransCanada was made. They insisted that the police re-arrest and charge me for “criminal trespassing” and they obliged without hesitation.

After I criticized their cozy relationship with the Canadian corporation destroying their own community, they responded by saying that they could just as easily give me a felony “Possession of a Criminal Instrument” charge (for “possessing” a tree sit apparently) and that I should feel lucky and keep my mouth shut. The subjective and arbitrary application of the law that was tailored to fit the interests of this industry sickened me. The arresting officer then forced me to give my full name and address to him which was then written on a business card and handed to two men in TC helmets who had been collecting names and video and of us for the ongoing SLAPP lawsuit; my private information was collected on their behalf by armed officers so that this corporation could sue me for protecting land they wish to destroy.
Twenty four hours a day, there were 1-3 of these private police officers camped under each of the tree-sits, about a dozen more sporadically placed along the new easement, and an unknown (but likely quite large) number ordered to patrol the woods and easement entrances in regular intervals to prevent us from receiving more batteries or food from our friends on the ground. There were 4 large high-intensity stadium light rigs (the sort you might see surrounding a little league baseball field at night) placed beneath the trees and the noise from their gas generators was a constant, maddening reminder that we were being watched at all hours. During the day, two men who work for TransCanada would patrol the perimeter of the tree village with large, expensive-looking video cameras and attempt to record us during times we weren’t wearing bandanas in order to gather evidence for their suit against those of us committing “eco-terrorism.”

On my daily “terrorist” excursions to forage abandoned tree-sits for protein bars and cold cans of soup I would expect an audience of police and TC workers to gather below me and then incessantly videotape and criticize my poor traversing ability. This forced me to wear a bandana over most of my face and add poor visibility and insecurity to the ever-growing list of stressors associated with dangling from a ½” rope.  One particularly blatant disregard for our safety (among many) came in a similar fashion the night before I was arrested when my tree buddy was giddily traversing back to surprise me with the hot sauce she found earlier that day in another tree. While attempting to switch over her safety knots and pulley at a notoriously difficult traverse juncture, the officer beneath her felt compelled to turn his high-power flashlight to the strobe setting at shine it up in her eyes. After she repeatedly told him how dangerous he was making the situation and was only met with inhuman indifference, she yelled something beautifully piercing that I must repeat:

“Look at you. This is who you are.

You have sold out your community for $30 bucks an hour. That’s all it takes? That’s your price? Now look at you, you’re standing here and you’re being paid to endanger my life… Why are you even here? Who does this serve? Are you “protecting and serving” your community right now or are you just being an asshole?”

…to which he unapologetically replied: “I’m just an asshole.”

Immediately after I asked her if she had a camera on her person to record what he was doing, the officer killed his light and scurried back into the woods to return to his smartphone, cooler, and fireside lawn chair.

That night I lost a great deal of faith in our police system that is meant to “protect and serve” and I encourage you to also challenge this discourse when trying to understand and dismantle the power structures that not only create, but actively protect and preserve the misery associated with projects like this pipeline. If it was left up to the communities being exploited by the pipeline, not to the police who allegedly “serve” them, do you really think our friends would have gone to jail for trying to bring us food?

At the end of the day, the state repression we have seen in the last few months should not be viewed as a new, isolated anomaly of the Texas reactionary police force; these systems of power and oppression are widespread, diffuse, and have existed as long as industry has needed protecting from those of us who are sick of being exploited and poisoned by it. Let us not forget that the West Virginia State Police (that has treated Mountain Justice activists is strikingly similar ways) was only established in response to the 15,000 miners who militantly rose up against the murderous coal industry at the Battle of Blair Mountain. This heroic attempt to unionize the West Virginian coalfields and attain humane working conditions – now considered the largest class war in US history – was only crushed after the US army intervened under presidential order and over one million rounds were fired.

When power feels threatened by those it purportedly serves, its natural response is to re-assert its dominance through intimidation and then create seemingly-neutral institutions to codify and quietly maintain this authority. I hope it is clear that there is nothing neutral about an institution that has been carefully designed in response to effective struggle in order to subjectively and arbitrarily enforce laws that protect industry profits and criminalize our acts of self-defense. As Michel Foucault once elegantly put it:

“The real political task in a society such as ours is to criticize the workings of institutions which appear to be both neutral and independent; to criticize and attack them in such a manner that the political violence which has always exercised itself obscurely through them will be unmasked, so that one can fight against them.”

While I am confident that our new friends in the trees are well aware of the situation they have put themselves into, I can’t in good conscious let their sacrifice be taken for granted by those who haven’t experienced state repression firsthand. In the coming weeks as we see these folks facing extreme thirst, starvation, isolation, and lawsuits at the hands of these police, it is my hope that we can indeed unmask the state’s monopoly on violence against us and begin to finally understand the scope of the power structures we are resisting so that we may move forward towards a livable world. And perhaps then may we learn what it means to fight for our lives.

Permanent link to this article: https://tarsandsblockade.org/from-the-trees-their-police-day-37/