Oklahomans Rally on KXL Easement Through Indigenous Lands to Say: “No Tar Sands on Stolen Lands!”

UPDATE WED 9:00AM: Did you like our corporate accountability actions? Wanna join in on the fun? Find a TransCanada office or one of their investors’ offices in your community and hold your own solidarity action!

UPDATE WED 1:30AM: It’s a good night to get out of jail, apparently, cause our four friends who were arrested in Liberty County during some rural actions while the majority of us were at the Keystone XL offices are free, too! Welcome back Ben Reynoso, Jason Ball, Henry Slocom, and Keelan McWayne!!!

UPDATE TUES 9:26PM: Audrey Campbell is FREE from Angelina County Jail after almost a week since she climbed into a 50 ft high platform to stop construction on the toxic Keystone XL tar sands pipeline. Because of her providing exposure to that particular parcel of land, Angelina County realized that TransCanada was actually on County-owned land that the company had never sought a contract for. TransCanada was stealing land even without eminent domain! More on this soon! In the mean time, we send our love to our brave, beloved Audrey! You rocked it!

UPDATE TUES 3:00PM: Lots of pictures are coming in from around the country from our solidarity actions! See more photos from our Houston actions here.

In New York City, a demonstration at a TD Bank location was staged calling for TD to STOP FUNDING TAR SANDS!

Another pic of those intrepid New Yorkers assembled in Union Square to demonstrate solidarity with Tar Sands Blockade:

UPDATE 9:00PM: We just got video from an office demonstration at Michels Corporation in Brownsville, WI. Michels is one of the lead contractors building TransCanada’s Keystone XL tar sands pipeline in Texas and Oklahoma:

UPDATE 8:35PM: The eight Massachusetts blockaders who chained and glued themselves together in a TransCanada office in Westborough, MA have been freed from jail!

UPDATE 5:15PM: More information about the two arrests earlier today: Alec Johnson, a 61 year old climate justice organizer from Ames, Iowa, was arrested for demonstrating that he will not just ‘go away’ and refusing to leave the KXL lobby. The other arrestee was a videographer with Chicago Indymedia Center.

In a separate action earlier today, four arrests occurred in Liberty County, where work was being disrupted through small-scale, temporary walk-on actions.

UPDATE 5:00PM: Protesters line up to force TransCanada and other dirty energy industry employees to drive through “gauntlet of shame” on their way out of the office building’s underground parking garage.

UPDATE 4:45PM: TransCanada employees are standing on the other side of a glass wall taking photos.

UPDATE 4:40PM: Police officers have given a ticket to a supportive passerby for “unnecessary use of horn” and half a dozen mounted police arrive as an impromptu dance party begins. Police do not participate.

UPDATE 4:20PM: Police have forced the Houston tar sands blockaders back onto the sidewalk around the Houston TransCanada headquarters.

UPDATE 4:17PM: Oft-quoted TransCanada spokesperson David Dodson appeared in the lobby, saw the blockaders, and promptly retreated back into the building.

UPDATE 4:15PM: Over a dozen police arrive on the scene with bags full of plastic zip-tie handcuffs. Blockaders are chanting “No tar sands! No way! Not ever, not today!”

UPDATE 4:11PM: Over fifty blockaders inside TransCanada’s Houston headquarters are marching the KXL pipe monster around, a those affected by its toxic rampage stage a die-in. “All Night! All Day! Tar Sands Blockade!”

UPDATE 4:09PM: In another sign that our new campaign to shame the financiers and contractors working with TransCanada is growing, blockaders in Brownsville, WI protested in solidarity with TSB at the headquarters of Michels Corporation, one of the main contractors building the Keystone XL pipeline.

UPDATE 4:06PM: Over fifty blockaders have stormed the lobby of a second TransCanada building in Houston, the TransCanada headquarters at 717 Texas St!

UPDATE 3:00PM: The eight Massachusetts blockaders are still locked inside a TransCanada office in Westborough, MA. Not only are they chained together, but their hands are SUPERGLUED together!!!

UPDATE 1:20PM: A group of eight Massachusetts blockaders have locked themselves inside a TransCanada office to protest big oil’s attempt to lock us into climate disaster with Keystone XL. Here’s their statement on why they took action today: http://january7th.wordpress.com/

Also, this photo just came in from 350 Maine, where tar sands blockaders gathered in front of TD Bank, another one of the main financiers of the Keystone XL tar sands pipeline:

UPDATE 12:45PM: Solidarity actions across the country are planned for today and tomorrow. In Detroit, MI, Josh Achatz protested Chase Bank for funding tar sands exploitation by closing his Chase account! After closing the account, he began reading a statement while being drug out by security. He joined his supporters outside who were gathered in solidarity with TSB! This photo comes via mikedolsx on Instagram:

UPDATE 11:55AM: Two arrests confirmed so far. We’ll have more updates when we know more, though we’re not expecting charges greater than Class B Criminal Trespass.

A pipeline dragon has arrived at TransCanada’s offices! This is what we’ve come to slay: 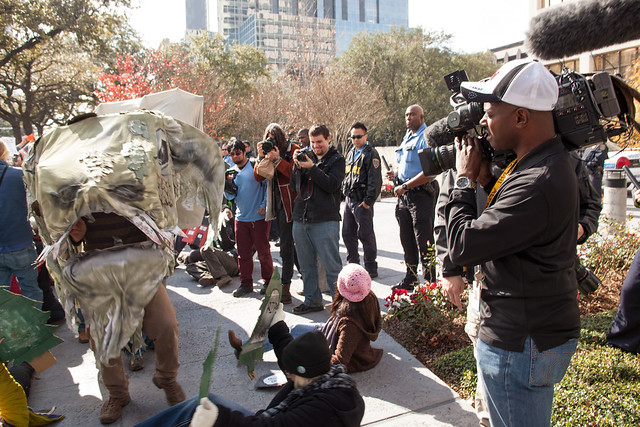 Right now 100+ of our friends have taken over TransCanada’s Keystone XL headquarters in Houston, Texas. You can help shut down work in TransCanada’s offices by flooding the phone lines all today to tell them we don’t want their dirty pipeline in anyone’s backyard.

Can you call TransCanada’s Keystone XL headquarters now to tell them you stand with your fellow Blockaders inside and outside their office today?

And here’s a suggestion for what you can say when you call:

Hi, my name is NAME, from CITY or STATE, with whom am I speaking? Thanks — I’m calling because I’m fed up with TransCanada’s abuse of landowners, community members and the planet. I stand with the Tar Sands Blockade, and we won’t stop until you do.

Let us know how it went here:

UPDATE 11:30AM: Police arrive at front door, issue dispersal order for protesters in the lobby. 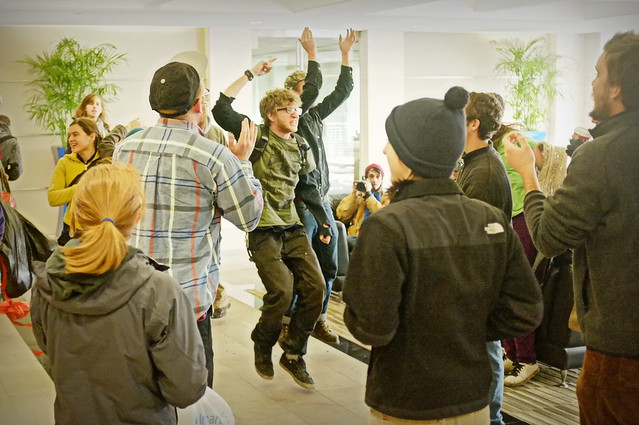 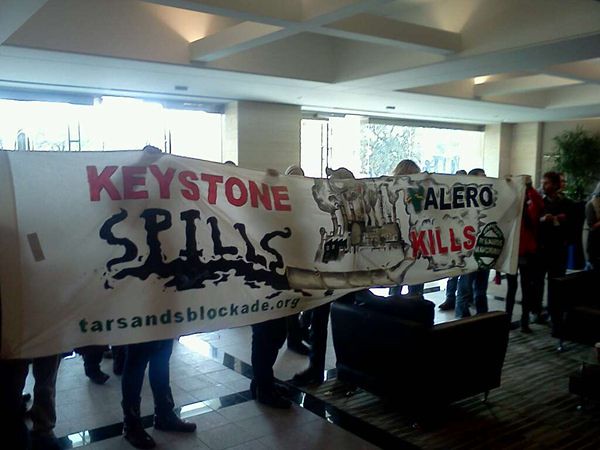 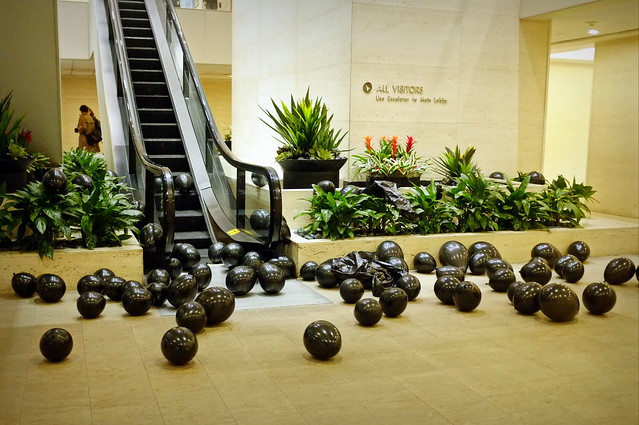 UPDATE 10:30AM: Tar Sands Blockaders have taken over the lobby of TransCanada’s Keystone XL headquarters!

After being forced out of the lobby by police, the protesters gathered on the sidewalk and performed street theatre in which a “pipe dragon” puppet destroyed homes and poisoned water until being slain by knights representing the grassroots coalition of Tar Sands Blockade, Idle No More, Earth First and others.

CHECK OUT THE LIVESTREAM HERE:

Today’s action was the largest yet in the months-long campaign by climate justice organizers and Texas landowners against the pipeline and the first mass action in Houston targeting TransCanada corporate offices directly. It kicks off a new phase of Blockade organizing, targeting the corporate, political and financial infrastructure behind the Keystone XL pipeline with solidarity actions planned across the country this week, including in Austin, Detroit and New York City.

Activist collective Anonymous today released the personal information of TransCanada executives and Keystone XL’s financial backers in solidarity with the launch of the Blockade’s new strategy phase. Protesters are currently chained together and actively occupying TransCanada’s offices near Boston.

“From the Texas backwoods to the corporate boardrooms, the fight to defend our homes from toxic tar sands will not be ignored,” said Ramsey Sprague, a Tar Sands Blockade spokesperson. “We’re here today to directly confront the TransCanada executives who’re continuing on with business as usual while making our communities sacrifice zones.”

Last Thursday, a tree blockade near Diboll, TX brought TransCanada’s illegal practices to light, showing that they hadn’t received permission from the county commissioner to build the pipeline through county land.

In addition to land and water concerns, the Keystone XL pipeline is a classic case of environmental racism. In Houston, the low-income neighborhoods near refineries, such as Manchester, whose residents are 90% Latino, will have to breathe the noxious wastes of the tar sands refining process.

“We’ve done everything we can to stop this pipeline: we’ve petitioned, rallied and taken direct action. The historic resistance to this pipeline shows how risky an investment this and other tar sands pipelines have become,” said Alec Johnson, one of the office blockaders. “Tar sands oil spilling into our waterways and millions of tons of carbon pollution spilling into the atmosphere means that this industry’s days are numbered.”

Permanent link to this article: https://tarsandsblockade.org/houston-action-transcanada-offices/