Matt is out of jail!

Occupy Denver has launched a fundraiser for Audrey and Mike, both members of the group, to help secure their release from jail. For a donation of $30 or more they will send you a t-shirt replicating the “You Shall Not Pass” banner that hung from Mike’s sit. Occupy Denver has also been instrumental in running the legal hotline that Mike and Audrey call to keep in touch with us. Check out the fundraiser on their website here. Solidarity y’all!

Yesterday afternoon, to celebrate the beginning of the Building Blockadia Action Camp, Tar Sands Blockade organizers, local indigenous people and camp participants held a rally in solidarity with Idle No More on the Keystone XL pipeline easement. People spoke out about why they were there and why indigenous solidarity was important to them, and then sang songs celebrating the blockade and the indigenous people hosting us for the weekend. Check out some photos and video below:

UPDATE: Saturday, 11 am – The four ground supporters have been released from jail, but the two tree sitters remain

Audrey remains in jail after two days, and Mike has now spent a full 24 hours in jail. The four people providing ground support were released last night after posting bail, but Audrey and Mike continue to be held on $10,000 bail each. Show your solidarity with a donation to ensure their speedy release, but if you can’t donate, you can at least send them a letter to let them know they are not alone. Supporting people in jail is one of the most important things we can do to keep our movement alive and thriving, and Matt, Isabel, and Glen can certainly attest to how reassuring it is to receive letters while imprisoned. To send Audrey and Mike letters:

Solidarity keeps our movement healthy and helps make more people feel comfortable risking arrest for what they believe in because they know they will be supported. Your ongoing support is what continues to make our movement successful.

UPDATE: Friday, 4 pm – The police have called the immigration authorities to investigate one of our friends in jail because he is a person of color.

UPDATE: Friday, 2 pm – 2 brave blockaders are being held on $10,000 bail each. 4 more supporters in jail.  Demonstrate your support for their efforts with generous contribution to their legal fund.

UPDATE: Friday, 10:24 am – The remaining sitter, Mike, has been extracted by police.

UPDATE: Friday, 8:30 am – One sitter remains firmly entrenched atop their aerial perch directly in the path of the Keystone XL pipeline construction this rainy January morning.

UPDATE: 7:55 pm – All quiet at the blockade site; five arrested, but one sitter remains. Please consider making a donation to the legal fund of the people arrested today for standing up to the death machine of industrial extraction.

UPDATE: 6:05 pm – Cherry picker still trying to reach sit, but having trouble; four attempts with no success so far.  30 people stand in solidarity with Audrey and Idle No More from the other side of the highway.

UPDATE: 5:55 pm – Cherry picker moving in on eastern sit, attempts to reach in from outside traverse perimeter

UPDATE: 5:20 pm – Extraction attempt begins; supporters pushed back across street, one arrested for refusing to leave 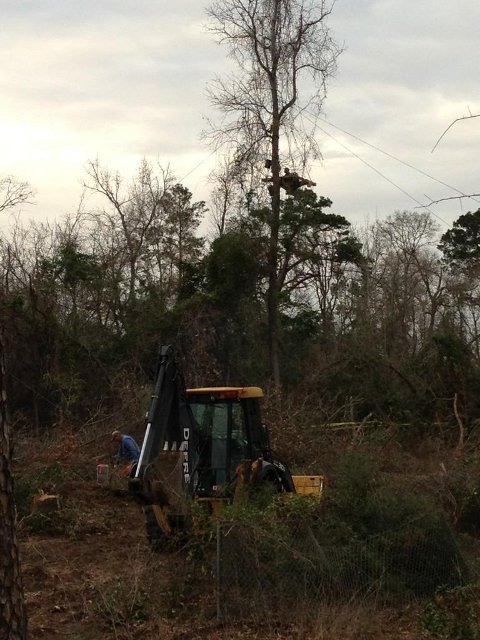 Supporters pushed back across street

UPDATE: 4:50 pm – Excavator has moved in about 100 feet toward tree blockade

An excavator owned by Angelina County has arrived at the blockade to clear the ground shortly before a fire truck arrived to extract the blockaders. The police have established a “free speech zone” across the highway in order to stifle free speech and prohibit people from exercising their Constitutional rights, namely, from peaceably assembling on the side of a public highway to bear witness as police take extremely dangerous risks with the lives of their friends and comrades. Police stopped traffic so people could cross to the “free speech zone”…and only one person crossed. Stay tuned and follow us on Twitter and Facebook for all the latest updates.

Earlier today, three blockaders were arrested for providing ground support for Audrey and Mike in the trees. Gerald Sproehlich was arrested on charges of criminal trespass and evading arrest and being held on a $3,000 bail; Dakoda Benson and Pat Boyle were charged with evading arrest with bail set at $1,500. They were all arrested for providing support for the brave aerial blockaders putting their lives on the line; show your support by making a generous donation to the legal fund.

Police have threatened to remove ground lines in order to bring in a cherry picker or ladder truck to extract the aerial blockaders. However, their eagerness to arrest protesters is betraying their recklessness and ignorance as they don’t have a clue about how to deconstruct the blockade and have even asked Audrey how to do it! Audrey is streaming from the trees now, check out the action below:

Angelina County sheriffs continue to push the limits of their legal authority with their harassment of supporters trying to observe the blockade from the side of a public highway. Supporters have been detained under the pretense that they were “witnesses to a felony investigation” and ordered to produce ID, yet every person driving down the highway can clearly see what’s going on and is not receiving the same treatment. Two of those supporters left to pick up snacks for the group, and upon their return they were immediately accosted by a group of police officers and cornered back into their vehicle and had the doors forcefully shut by the officers. Watch a video of the encounter below:

Immediately to the south of the tree blockade, a public road has been closed to all vehicular traffic, and anyone attempting to drive down it is stopped by a sheriff and ordered to turn around. They have closed off public roads to everyone just to prevent observers from seeing the blockade, which has resulted in us losing almost all contact with Mike. On the ground, one of Mike’s direct supporters has been injured and is unable to get out, and the police are refusing to let anyone in to help him. Show your solidarity with Mike, Audrey, and the Idle No More First Nations Movement with a donation to keep our movement thriving and to keep momentum building into this weekend’s Mass Action Camp.

Mike atop his tree blockade

From her perch in the trees, Audrey has demanded to talk to the county commissioners about stopping the Keystone XL pipeline from cutting through their county and endangering the health of their communities. The sheriffs have refused her request and continue to endanger her by preventing her ground support from being nearby, in some instances chasing them over half a mile away from the blockade. Show your solidarity with Audrey and Mike by calling the commissioners and asking them to go out to the blockade and listen to their concerns.

Solidarity with Idle No More

Two more people who were directly supporting the tree blockade have been arrested, bringing the total number of arrests up to three. You can show your support for our newest tree blockade with a generous contribution to help us keep the blockade supplied and to get those arrested the legal support they need.

UPDATE: 11:50 am – Police detaining supporters standing on side of highway; one direct supporter arrested

We have confirmation that one direct ground support person for the tree blockade has been arrested, and another placed in handcuffs. Police have been detaining and checking ID’s of people who have been standing on the side of the highway, protesting in support of the blockade. They are also creating a visual blockade with their cars so that supporters from the highway can’t see what’s happening with the blockade and around the life-lines.

Call the Angelina County Sheriff’s Department and demand that they stop detaining people for standing in public areas and exercising their constitutional rights: (936) 634-3332.

UPDATE: 11 am – Police and workers getting dangerously close to life-lines of eastern platform.

One critical way for blockaders to stay safe is for them to stay in communication with ground and off-site support. They are using pay-as-you-go phones while blockading to protect their personal phones from police investigation. Make a donation to help us keep in touch with the brave blockaders putting their lives on the line. Your contributions allow us to bring you better coverage of what’s going on in the trees, and right now we have live video coming from up top:

UPDATE: 10:30 am – Plainclothes officers have chased ground support away from tree blockade.

UPDATE: 9:55 am – Check out this awesome video of blockaders preparing for action:

UPDATE: 9:45 am – Six workers showed up at blockade, and all promptly left. One is going home to learn more about toxic tar sands on our website!

UPDATE: 9:35 am – Workers and county sheriffs on site. Sheriffs are walking around site and reading warning signs attached to life-lines.

Diboll, TX, January 3, 2013 9:00AM — Late last night, blockaders set up two “dump platforms” in trees outside of Diboll, Texas which would otherwise be cleared to make way for TransCanada’s Keystone XL toxic tar sands pipeline. These special “dump platforms” are shielded by an unprecedented 80-100 ft perimeter of life-lines which, if disturbed, would certainly dump the two blockaders nested in them roughly 50-60 ft in the air. The Blockaders are sitting in solidarity with the now global Idle No More campaign for First Nation’s human rights and tribal sovereignty that very recently started in Canada.

This new tree blockade comes just a couple weeks after the end of Tar Sands Blockade’s 85-day tree blockade near Winnsboro, TX. TransCanada rerouted the tar sands pipeline to go around the Winnsboro tree blockade, despite having told countless landowners, including Douglass resident Mike Bishop, that the route was set in stone and could not be altered to avoid bulldozing their cropland, or to go around schools, neighborhoods, or ecologically sensitive areas.

This new site is surrounded by barriers like Highway 59, railroad tracks, and Ryan Lake. With these nearby, blockaders have found a location around which the pipe cannot easily be rerouted.

The viability of this blockade depends entirely on the safe conduct of TransCanada and local police forces. They could easily end it by cutting ropes and seriously injuring or killing the tree sitters. Blockaders Audrey and Mike know the risks. They are prepared to stay on their platforms, just big enough to lie down on, indefinitely, to defend their collective home from the expansion of tar sands exploitation that Keystone XL would usher in.

“Protecting the living systems which we’re a part of is a moral necessity,” shared Audrey, who is sitting in a singular tree left in a newly-cleared field. “Extraction of the tar sands is the most destructive project on the continent. It threatens the integrity of the entire biosphere, not to mention the First Nations dependent upon access to clean water, land, and air for the health and food for their tribal communities.”

Mike, another sitter suspended in a skypod between two trees, agreed, “That their plight has been so long ignored by industry and policy-makers is a clear violation of their human rights and a crime of conscience. That’s why we are enthusiastically supporting the Idle No More movement!”

“Institutional methods of addressing climate change have failed us,” explained Ron Seifert, a Tar Sands Blockade spokesperon. “Rising up to defend our homes against corporate exploitation is our best and only hope to preserve life on this planet. We must normalize and embrace direct, organized resistance to the death machine of industrial extraction and stand with those like Idle No More who take extraordinary risk to defend their families and livelihoods.”

Want to get more involved? Join the campaign.

Permanent link to this article: https://tarsandsblockade.org/15th-action/