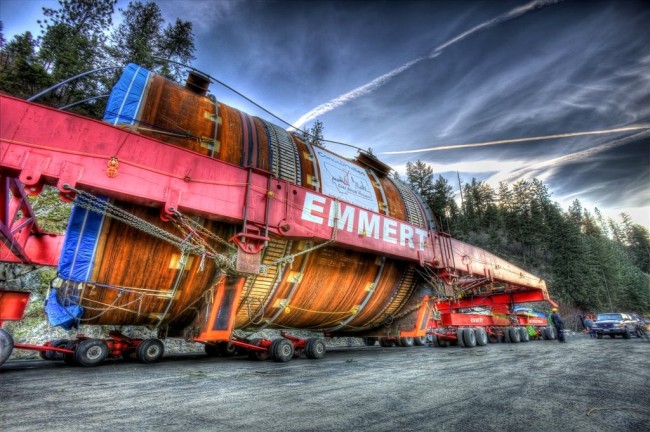 Idahoans continue their fight against mega-load passage through their state. Mega-loads are enormous pieces of equipment destined for use in the tar sand extraction in Alberta. Protests will be leaving from Moscow December 3 and 4

If volatile, climate changed weather does not mercifully impede passage to Alberta tar sands operations, two more Sunshine Oilsands wastewater evaporators could traverse U.S. Highway 12 between 10 pm and 5:30 am next Monday and Tuesday night, December 3 and 4. The Idaho Transportation Department in Boise issued permits on Friday afternoon, November 30, allowing Omega Morgan to haul both over-legal equipment shipments weighing 80,000 pounds and measuring up to 53 feet long, 20 feet wide, and 21 feet tall. Moving at close to normal speeds, each eastbound megaload could cross Idaho separately in one night, from the Port of Wilma in Clarkston, Washington, along Idaho Route 128 and Highway 12, to Lolo Pass on the Montana border. Three flagging teams and pilot vehicles and two trucks with portable signs (but no ambulance) will travel with each module and escort traffic around the convoy at pre-identified pull-offs, as required by the Omega Morgan transportation plan that limits traffic delays to less than 15 minutes.

The time has come to take a stand, wild Idahoans. As we await a mid-February hearing of a federal court case against the federal agencies responsible for upholding the wild and scenic river, scenic byway, and all American road designations of the Highway 12 corridor, these second and third tar sands transports set a precedent for transformation of cherished Northern Rockies two-lane rural roads into industrial conduits to Canada’s Mordor. Although a coalition of Idahoans and Montanans prevailed in two district court lawsuits defending these remote routes from ExxonMobil/Imperial Oil and banishing megaloads from the largest wildlands complex in the contiguous U.S., our region and national conservation organizations turned a blind eye to 350 tar sands modules degrading our highways and civil liberties on their way to expanding ecocide and genocide around Fort McMurray, while scores of Moscow and Spokane activists struggled against the behemoths and pleaded for assistance. As disparate transport companies intermittently rampage the beautiful Clearwater and Blackfoot river valleys and Rocky Mountain Front, we cannot in good conscience facilitate the vast devastation of the biggest carbon bomb on Earth and subsequent climate chaos with our tax dollars, state agencies, public roadways, and comfortably confined lifestyles. Like the sacrifice zones of our home places, even our most cherished wildlands have not been spared by the recent ravages of extreme energy production and transportation.

So in solidarity with our esteemed comrades among the Athabasca Chipewyan people, the Unist’ot’en clan, Tar Sands Blockaders in Texas, Utah tar sands mining resisters, Trailbreaker pipeline reversal opponents, and all the good North Americans who have suffered hardship, sickness, death, and political repression to free our continent from the poisons of fossil fuel tyranny, Wild Idaho Rising Tide (WIRT) activists and our regional allies proclaim “ENOUGH!” Join monitoring and protesting carpools provisioned with video and still cameras, audio recorders, and notebooks, converging and departing the corner of Second and Washington Street in Moscow, at 9 pm on Monday and Tuesday evening, December 3 and 4, and possibly other following weeknights influenced by impending rain and snow. Your involvement in gathering evidence and demonstrating resistance grows more crucial with every tar sands supply line incursion. We will not relent until Big Oil abandons its ruinous schemes to fry our planet for its profits. Contact Wild Idaho Rising Tide for more information and to participate as a megaload monitor and protester, at our website, facebook page, [email protected], 208-301-8039, or the WIRT Activist House.

Permanent link to this article: https://tarsandsblockade.org/wild-idaho-rising-tide-announces-protests-against-megaloads/