David Hightower’s home is no place for a toxic pipeline. But thats exactly what TransCanada has planned for the Winnsboro, Texas landowner’s front yard. So today Tar Sands Blockade is rallying to defend his home and hosting a community cookout on his front lawn to announce an ongoing vigil at his home and business.

We are drawing a line in defense of David Hightower and his muscadine grape vineyard. TransCanada’s Keystone XL tar sands pipeline route runs not only less than 200ft from Mr. Hightower’s front door, it will completely plow through his vineyard, destroying his home business. Its dangerous, and an insult to the safety of our neighbors. We will not allow TransCanada to plow through Mr. Hightower’s home nor business. 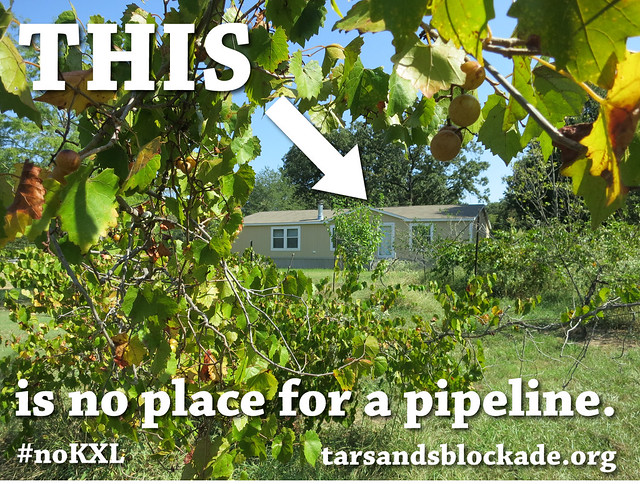 Today other area landowners whose property TransCanada’s Keystone XL tar sands pipeline will cross are rallying in solidarity with Mr. Hightower. Supporters and landowners from the across region and state are arriving on the scene and occupying the path slated to be plowed by TransCanada’s bulldozers. Check out more photos on our flickr stream.

Today is just the beginning of our ongoing campaign to defend David’s home, and we need your generous support to continue our vigil. Yesterday two of our supporters offered us a $1,000 matching donation, if we could raise that amount before tonight. Because of your generosity we’re already over half way to our goal! Consider a contribution today to help us reach our goal.

David Hightower and Susan Scott say "Come and Take It"

Defying TransCanada’s surveyors working across the street the community is rallying in defense of David’s livelihood. Plus, who would want to destroy David’s vineyard? His homemade wine is delicious! Supporters across the region are at his home now tasting its unique homegrown Texas flavor. Raise a toast and join us: “Make Wine. Not Pipelines!”

Franklin County Sheriff’s Department and Texas State Troopers even stopped by for a taste of our rally on the Keystone XL route. They were really friendly, and instead of making arrests they gave us reflective safety vests! 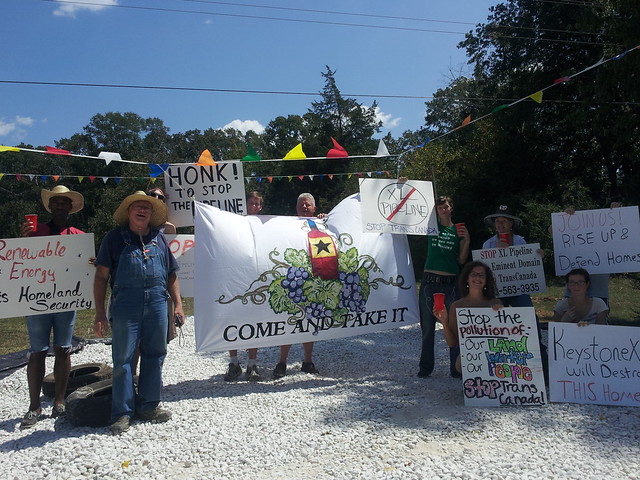 Supporters rally with David and taste his homemade wine

TransCanada wants to destroy this man’s vineyard and livelihood. Together we’ll send a unified message “Come and Take It.”

Permanent link to this article: https://tarsandsblockade.org/community-rallies-to-defend-david-hightowers-home-vineyard/